am still recovering from my trip to "Car Week" on the Monterey Peninsula just South of San Francisco. I dropped my wife off at the San Jose Airport, 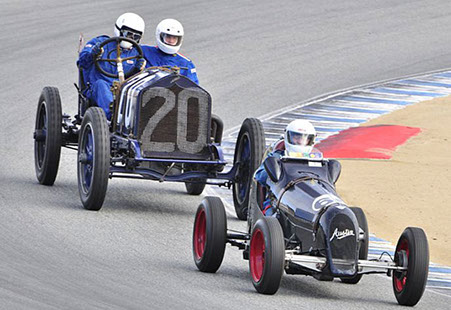 then quickly got into the 5 days of non stop car events.

Starting with the auction preview at Quail Lodge and the fabulous Fiat V8...an oxymoron to some but to Car people this is the probably the finest Fiat ever. They also were auctioning off one of Brigg Cuningham's fabulous roadsters and some mid 60's Ferrari Gand Touring cars...arguably the best era for the big GT cars with prancing horse badges.

Thursday was the early morning Tour d Elegance were the cars that will be on display at Pebble Beach Concours go on a scenic drive to gather extra points....then on to the main event in my mind the 4 days of racing at Rolex Montery Historic Races at Mazda Laguna Seca Raceway.

Friday was spent at the track and Saturday I got up 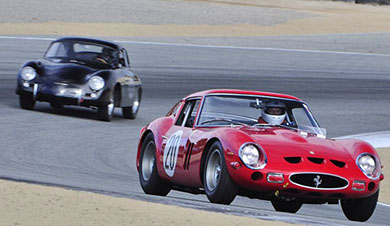 early to go to the Concorso Italiano to shoot the cars as they drove in....the easiest way to shoot the cars without a crowd. Soon I was back at the track to shoot the Group A races and then went to the evening auction at Pebble Beach and could hear the action as an early 60's "Shark Nosed" Ferrari GT car sold for an even $15 million. I got inside in time to watch Jay Leno do his magic and auction off a pre production 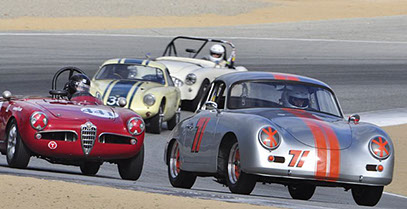 Sunday I was up at 4:30 a.m. and off to the  The Pebble Beach Concours D Elegance is arguably the most famous car show in the world and one of my fellow photographers stepped it up this year by actually presenting a Ferrari for a friend of his. DIrk de Jager of Belgium is used to arriving early as a photographer to get a coveted Hagerty's "Dawn Patrol" hat and was the first car to be driven onto the field. If any of my friends need a car presented at Pebble Beach, let me know for next year.

As a Canadian, I have to feel extremely lucky to have been to the Rolex Montery Historic races as often as I have been. I first went with my parents in 1983 when Ford was the featured Marque. The nest year my Brother and two of our friends drove my Dad's car down and that started a 4 year spree of roadtrips South to see Ferrari in 84 Alfa in 85, Mercedes in 86 and Chevrolet in 87.

I took a break in 88-89 as I got married, then took my new bride to see Allard in 1990. I went again in 2006 for Cooper and then started my yearly treck again in 2010 and have been going ever since. Even with all these visits under my belt nothing could prepare me for the all out assault of 36 GT 350's on the track at once.

The look and feel, not to mention sound of standing at the Corkscrew as 36 wild charging snarly beasts assault the track was truly awe inspiring.  Although the winning car was from Bogota Colombia...the other more notorious Columbia, I was proud to see our own British Columbian, Lindsay Ross come in middle of the pack at 18th driving a 1966 GT 350. 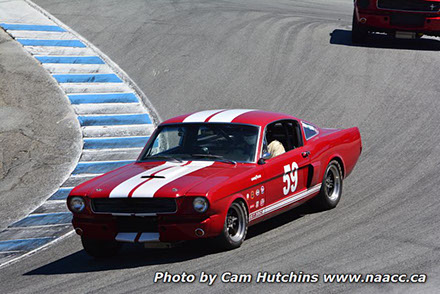 Fellow Canadian Lorne Leibel of Willowdale Ontario came 31st driving a 1965 GT350. Other "imports" racing were from Australia and Switerland.

In the race previous, Group 2A, David Hogg of Vancouver racing a 1956 Porsche Speedster 356A came 23rd in a group of cars from the USA, Australia and Germany. Group 6A saw  Keith Friesen of St Albert, Alberta come second racing a 1975 Lola T290 and Cal Meeker Pitt Meadows, BC come 4th in his 1973 LolaT294. 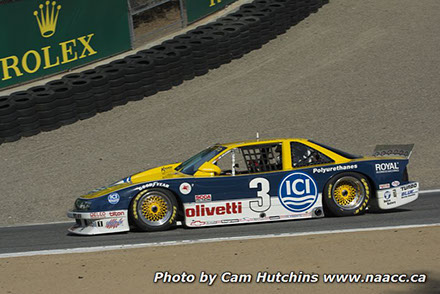 The last two races of the day Group 7a and 8a saw Meeker and Friesen again racing. I can only imagine what a mad house pit lane must be for Friesen racing three groups in  a row. Along with the many American cars, two cars from Australia competed with third place finisher Pieter Baljet of Duncan BC in a 1990 Chevrolet Beretta and Friesen driving a 1984 Mercury Capri

Group 8a was a virtual United Nations of drivers as cars from France, the U.S. Virgin Islands, Northern Ireland, United Emirates Mexico and  5 from the United Kingdom. 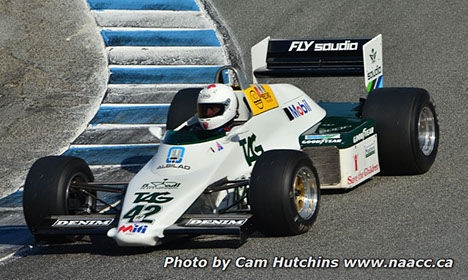 On Sunday Canadians could relax as only two drivers from Up North were racing. Denis Bigioni Pickering Ontario did not get to race his 1948 Talbot Lago T26C in the Group 1 B race as he ended up at Pebble Beach and won The Tony Hulman Trophy. I got some great photos of him racing on the friday and practicing on the Thursday. George Holt is originally from the island across the pond but moved from England to BC's Gabriola Island a few years back. he placed 12th  driving his 1954 jag XK 120 in the Group 2B

I thought I finished my car week at the Group B races at Laguna Seca. and was going to head home but got a call from one of the people I had met at the Concorso Italiano. Todd Glyer's Cousin Gordie had campaigned a Testa Rosa back in the day and had a book published about it's history and a photo album with all his race memorabilia....including an original sales brochure for the 50's Testa Rossa. 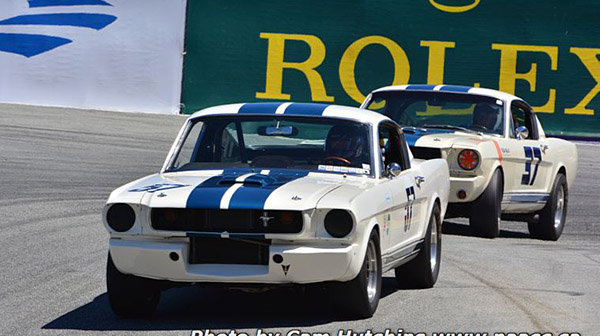 This very same car that I fell in love with back in the early 80's and took many pictures of it at the Laguna Seca track. 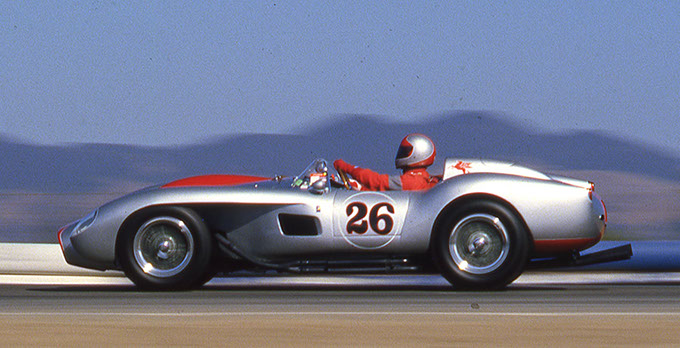 Shot at the approach to the Corkscrew by NAACC photographer in the middle 1980's at mazda Laguna Seca Raceway.

So when Todd invited me to his house to look over the treasures I had to accept. This is the car most car guys will remember as a print sold in the 80's of the iconic silver Ferrari Testa Rossa shot by Dennis Grey in a studio with a dark background...I have one mounted on my garage wall. The photographer of this iconic image was at the races and I got to hang with this legend of motoring photography.

This Testa Rossa was not at the track racing but had been at Pebble Beach last year...and now it is owned by a Canadian and resides in Quebec. One more reason to visit the other side of the Country.

After getting hiome I once again thank the advancments in photography that allow me to edit my photos on a Computer instead of a darkroom...but do complain that because digital memory is so cheap....it takes more time to edit the many thousands of photos that it takes to shoot them. But I can only say...I can hardly wait until next year!!!

Cam Hutchins is a Photo Journalist on special assignment with the NAACC as well as graphic artist creating commissionsed artwork of vehcles, the naacc webmaster and feature columnist for the two major Dailys in the Vancouver BC market.

“It was an amazing celebration of the 50th anniversary of the mighty Shelby GT350 with 38 cars in one group being paced by Henry Ford III and taking the green flag from Carroll Shelby’s grandson Aaron Shelby,” said Gill Campbell, CEO and general manager of Mazda Raceway Laguna Seca. “Add into the mix remarkable pre-war cars, Formula 1, Formula 5000 and historic Trans-Am cars, and you have a stunning array of sights and sounds.”

The centerpiece in the paddock was the enormous heritage display presented by Ford Motor Company that featured the most famous of the Shelby GT350s. The continuously packed display looked back in time when these GT350s were being raced in true anger and winning worldwide.

Contributing to the week’s glamour were countless legendary drivers who enjoyed soaking in the environment and reminiscing about their former cars. “I love it when I see my former cars racing here,” said three-time Formula 1 World Champion Sir Jackie Stewart. “They may not go as fast as we did in the day, but it is wonderful to see them.”

Though last year was his first time coming to the Rolex Monterey Motorsports Reunion, Scott Pruett, a five-time Rolex 24 at Daytona winner, says it’s now one of his favorite things to do. “There is eye candy everywhere. It’s overwhelming to all your senses – sight, sound and smell. For any racer like me it is wonderful to come here and see these great cars and the passion among the car owners and drivers. The event is a great fit for Rolex, and Monterey is a great fit for the event; there is no better place for these drivers to come to race their cars.”

Visitors enjoyed the friendly interaction with the caretakers of racing automobiles in between sessions while wandering through the open paddock. And in Automotive Alley, auto enthusiasts could see some of the newest offerings from BMW, Porsche, Ford, Jaguar, Land Rover, Chevrolet, Acura, Nissan and Michelin.

The 15 race groups were comprised of some of the most recognizable marques in motorsports. There was Bugatti, Alfa Romeo, Talbott, Delage, Lotus, McLaren, Porsche, Ferrari, Aston Martin, BMW, Mercedes-Benz, Jaguar, Lola and so many more. Some of the most dramatic and entertaining racing was within the Formula 5000 group, whose last appearance in Monterey was in 1975 when Mario Andretti won the final professional F5000 race. That same car made a triumphant return home.

Prizes are presented not for winning, but for how well the cars are driven, preserved and the drivers’ overall spirit of the weekend. In the end it was Californian Dick Deluna and his 1917 Hall-Scott The Four-A-7A racing in the pre-1940 Sports Racing and Touring Cars group that stole the show. He was awarded the most coveted “Spirit of Monterey” prize, determined by an independent panel to honor the single driver who most “excelled in the spirit of the weekend.”

“This 1917 Hall-Scott The Four-A-7A is just a hoot to drive and it’s a crowd pleaser,” said Deluna, after receiving a specially engraved 18k yellow gold and stainless steel Rolex Oyster Perpetual Cosmograph Daytona. “I love racing, and I love cars. For me the award is the epitome of appreciation from folks who value what I have been doing with cars. I don’t pay homage to any particular car, so I bring out any car that meets the need of any particular venue. Touring, racing or shows. It’s my passion and my love and I feel fortunate that I am able to go all over the world to do this.”

In a similar vein to rewarding participation for the sake of passion, Rolex Awards of Excellence were awarded in each of the 15 race categories, going not necessarily to those who won but to those “most deserving.”

The Rolex Awards gathering concluded with the announcement that Bavarian Motor Works, better known as BMW, will be honored on the occasion of its 100th anniversary as the special marque at next year’s Rolex Monterey Motorsports Reunion, scheduled for August 18-21, 2016.

For visitors to Monterey Classic Car Week that is anchored by the Pebble Beach Concours d’Elegance and Rolex Monterey Motorsports Reunion, it a magical week of motor cars and social events that serve up big doses of memories.

Mazda Raceway Laguna Seca was established in 1957. The world-renowned raceway has been operated since its inception by the Sports Car Racing Association of the Monterey Peninsula (SCRAMP), a not-for-profit 501c(4) corporation. Each race season, SCRAMP donates its net proceeds to the volunteer groups that help put on the races. 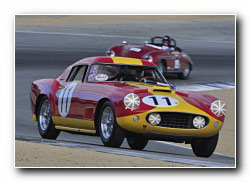 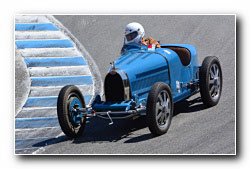