John has been involved in the collector car hobby for more than 45 years. His motor sport experiences are as varied as his passion for high performance vintage track racing and concourse quality restorations. He is a hands-on restorer who does most of his own work. These areas have contributed to his extensive background and form the basis of his belief that research, hard work and attention to detail will allow anyone who has a dream to become part of the winner’s circle. 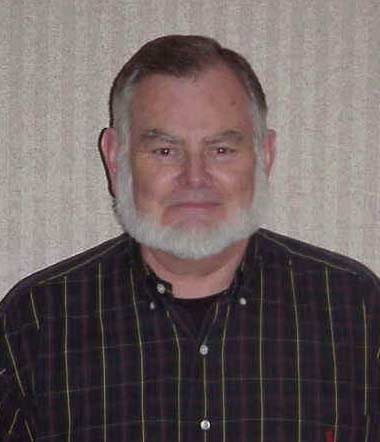 John is a three-time International High Point Record Holder and National Class Champion to the International Show Car Association of North America (ISCA) and a five-time recipient of the Specialty Equipment Market Associations (SEMA) “Most Outstanding Detailed Vehicle Award”. He was a “Best of Class” winner at the Model A Ford Club of America (MAFCA) National Meet in Reno, Nevada and the first foreign participant to achieve this recognition. He has also been a Classic Car Club of America (CCCA) and Early Ford V/8 National 1st place winner many times.

John organized and served as chairman for the Vintage International Antique Auto Show. This event opened the automotive theme period for the 1986 World’s Fair- EXPO 86. The show was a combination of concours quality restorations, nostalgic hot rods and muscle cars. This was the largest undercover collector vehicle show of its kind staged in North America.

John is a past National President to the Vintage Car Club of Canada (VCCC) and is serving as President of the National Association of Automobile Clubs of Canada Corporation (NAACC).

John is an Advisory Board Member to the Classic Collectible, and Special Interest Car Appraisal Guide of the National Automobile Dealers Association (NADA). He serves as a Board Member on the British Columbia Government’s Collector Car Club Council.

John’s judging philosophy is “there are no losers only different winners”. He believes that the vehicle speaks for itself and should be set aside from personalities, money and influence. He also believes that the NAACC has one of the finest and fairest Judging Standards ‘world-wide’.

John’s personal philosophy is “you will get as much out of this hobby as you are willing to put into it. The people in the hobby are what is ‘really’ important. We are only caretakers for the vehicles that we restore and hopefully they will be here long after we are gone.”

On a personal note, John owns and operates Carlson Custom Automobile Appraisals & Consulting. He is married and has two ‘car guy’ sons, “JJ” and David. His wife, Koko, and he have been married for over 40 years. They reside in the seaside community of Belcarra, BC. John is a journeyman master mechanic and a graduate of the University of British Columbia. He is now retired after a 30-year career as a Technology Education teacher.

He has been honored for his work in the collector car hobby by being inducted into the Hall of Fame the Vintage Car Club of Canada, the National Association of Automobile Clubs of Canada Corporation and the Greater Vancouver Motorsports Pioneer Society.

• Certified Senior Judge to the Model A Ford Club of America

• Member of the British Columbia College of Teachers

Areas of Consulting include: Concours d’ Elegance strategies, (How to put on a successful Concours) museum design concepts, their form and function, and collector vehicle workshop and vehicle storage design.

Tonight at the Cobble Beach Concours d’Elegance opening Banquet The Lee Iacocca Award was awarded. It was the first time in its history it was awarded to anybody outside the USA! 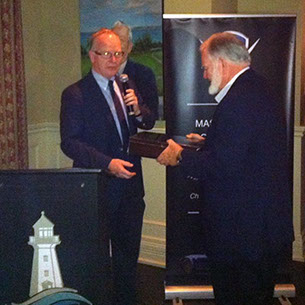 This prestigious Lee Iacocca Award was established to recognize outstanding classic car enthusiasts and is given for Dedication To Excellence In Perpetuating An American Automotive Tradition. This award celebrates auto enthusiasts on multiple levels, including character, community involvement, integrity and a level of excellent presentation of their vehicle. This beautiful award is a one of a kind elegant plaque with a likeness of Lee Iacocca and his signature engraved in gold. Since the awards’ inception in 2006, the Antique Automobile Club of America named the Lee Iacocca Award “the most coveted award on the classic car circuit.” 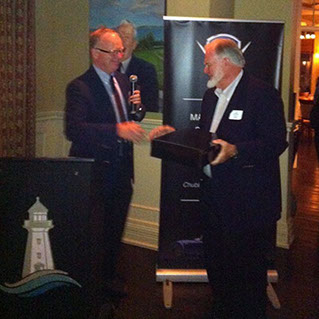 On behalf of the board of the National Association of Automobile Clubs of Canada we would like to congratulate our President Mr. John Carlson who was awarded this award.

Congratulations John! There is no one who deserves it more! 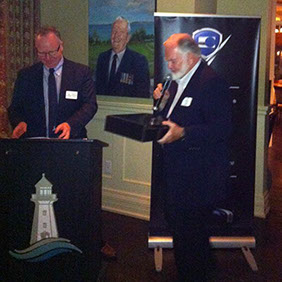