Described as a museum springing to life, the Rolex Monterey Motorsports Reunion is the largest event held during the famed Monterey Classic Car Week, and is the only event where cars are doing what they were originally intended to do…race. Approximately 550 race cars are invited to compete in the world’s premier motoring event, and are accepted based on the car’s authenticity, race provenance and period correctness.

A New Name for America's beloved home of the Corkscrew!

The 17 year deal between Laguna Seca and Mazda came to an end March 31st 2018 and a the new sponsor WeatherTech took over the sponsorship April 1, 2018. WeatherTech is a large floor mat company with ties to racing so it is a good fit for the fans. WeatherTech is the title spnsor of the IMSA WeatherTech SportsCar Championship.

The track is owned by Monterey County and although the financial reimbursement is smaller than the Mazda deal, WeatherTech will not require track days for testing . This frees up days for lucrative club days and other on track events.

The track is operated by SCRAMP (Sports Car Racing Association of the Monterey Peninsula) and many changes are ongoing including a new bridge at the start/finish replacing the present bridge, new paddock buildings, better drainage and improved Wi-Fi.

The changeover will be seamless, except for the signage crews who will be frantically making many changes.

What:  Where else can you see and hear historic race cars at full speed doing what they were originally intended to do … and that’s race. The annual Rolex Monterey Motorsports Reunion is a celebration of motorsport history that brings approximately 550 race cars together in one open paddock for everyone to enjoy. Each accepted car, from more than 1,000 entry applications received, is scrutinized and accepted based on the car’s authenticity, race provenance and period correctness.

The event relives motorsport history at the iconic circuit, which has been the scene of America’s golden years of sports car racing since its inception in 1957. In addition to the entertaining on-track action, there are always engaging autograph opportunities with legendary drivers, Q&A sessions, and fine wine and cheese tastings among the myriad activities.

Featured Marque: Nissan and its illustrious racing history that dates back to its Datsun heritage.

Provisional Schedule: Please click HERE for the most up-to-date schedule.

Run Groups: This year will feature some of the most popular and competitive groups, such as Formula One, Trans-Am and Can-Am.

Tickets: Camping and ticket packages are on sale and may be previewed HERE.

Although 2017 marks the 70th Anniversary of Ferrari, the

big emphasis was placed on the 60 years Laguna Seca has been holding races. They used to race during car week alongside the Pebble Beach Concours d Elegance on the famed 17 mile drive but after 7 years a fatality shut down the races at Pebble Beach.

Using part of the land of the US Army's Fort Ord (a maneuver area and field artillery target range) and $1.5 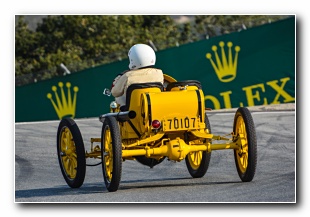 million raised by local business owners the track was completed and on November 9 1957  the first race was won by Pete Lovely driving a 1956 Ferrari 500 Testa Rossa. With the winning car being a Ferrari and the 70th anniversary of Ferrari it would be fair to ask why there seemed to be no Ferrari representation at the Rolex Monterey Motorsport Reunion this year.

For the past few years I have been thrilled by the displays of numerous cars put on by the feature Marque. Chevrolet even put on a whole Island for their big year. The display of amazing racecars that had competed at Laguna Seca over the years was great, but I did miss seeing what Ferrari could of come up with.

The races run from Thursday to Sunday and the more 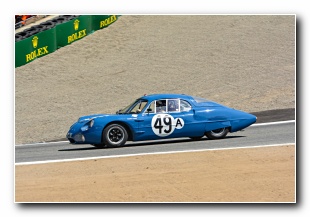 diehard fans show up the weekend before for the pre reunion races. I camped on the track in a tent site and find it one of the best ways to beat the traffic that is heavy the during most of Car Week. Friday I spent the day at the Corkscrew, Turn 8 and 8a that have thrilled so many before me.

Interestingly, the track got a couple of new curves added in 1988, at the end of the starting straightaway after turn 1 or actually kind of "Kink" 1, used to be a fast sweeping left turn heading up to what we know as turn 6. A new hairpin became turn 2 and then turn 3 and 4 added and where the new section met the old track became a high speed left turn 5. The track now is 2.238 mi (3.6 km). Previously the track was 1.9 miles long(3.06 km). 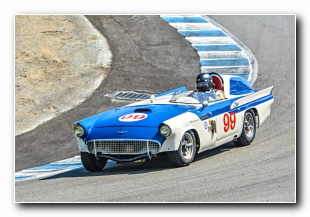 The cars race up the Rahal Straight between turn 6 and 7 and then plunge down and to the left and then to the right. The Corkscrew is a blind corner must be as exhilarating to drive as it is to watch as car after car try to find the best line and many do it on 3 wheels. Early in the morning I went on the outside of the course near the top of the Corkscrew and then progressed to the middle of Corkscrew during the afternoon.

Friday they run the qualifying in groups starting at group 1a through 7a and then after lunch group 1b through 8b. In between the groups, many time we get to see various cars on parade laps and even got to see two time world champ F1 driver Mika Hakkinen driving the McLaren M23 driven that won Emerson Fittipaldi his 1974 World Championship. The races are also where the 60th anniversary  of Formula Junior. I have been enamored with these pint sized powerhouses ever since our tour of the Stanguellini "Museo" in Modena Italy. I was familiar 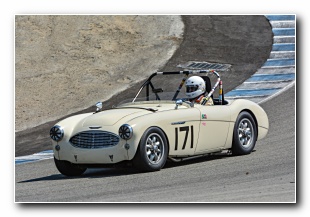 with their speed at the Westwood and Seattle tracks during vintage races in the 80's, but to see so many at one time was great.

Formula Junior started in 1957 as an affordable entry level way to find young talent suitable for Formula 1. Single seater, front engined, fenderless race cars powered by engine from production cars such as Fiats and Fords and built at first mostly in Italy and Britain. Soon they would get monocoque chassis and disc brakes. The Formula Junior cars were divided into two classes, one with drum brakes and cars with disc brakes. 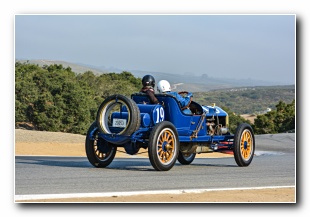 Sunday saw group 1b to be a great one for me as I got to know the owners of an extremely fast 1962 Austin Healey BN4 from Australia, but was beaten by the first place car, a 1959 Austin Healey 3000 S from Fairfield California. This group had Ferraris, Porsches, Triumphs, MG's, Sunbeam Alpines, Alfas and two racing first generation Thunderbirds. Absolutely magical for a fellow like me that has always had an Austin Healey in the Family. But the top speed was only 6 seconds quicker than the winner of group 2a but 25 years newer!

Group 3 was the big thundering sounds of Sports Racing Cars over 2litre the Ferrari Testa Rossa was awesome to look at but took it easy and came in last. But my love was for the 1953 Healey Chevy Special. Built in Hawaii in 1957 it is powered by a Chevy 265 cu. in. with T-10 4 speed tranny and wrapped in an alloy body and only weighs 1800lbs (816.47 kg)

Another wildly popular class was the Group 4a, 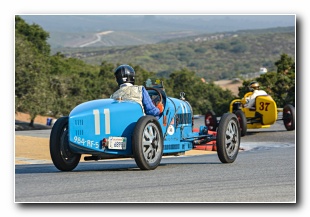 production-based GT cars. The rules were such that the basic roof, cockpit and doors needed to be as on a road going version of the car. This lead to some of the best looking racecars ever. Porsche 935, Chevrolet Monzas, Corvettes, BMW CSL, M1, and Datsun Z. The field for the weekend included over 500 cars carefully chosen from over 900 suitable applications. 64 were Formula Juniors.

To make the event even more memorable, Dr. Lee Talbot, who had raced at the inaugural race was at the 60th reunion competing in his 1967 Ginetta G4. Aged 87 years young, Dr. Talbot won the Spirit of Monterey Award with a specially-engraved Rolex stainless steel 18k Gold Daytona Cosmograph and a portrait of the race-winning Ferrari from the 1957 event by artist Bill Patterson. 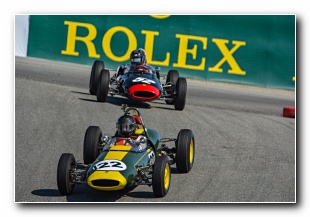 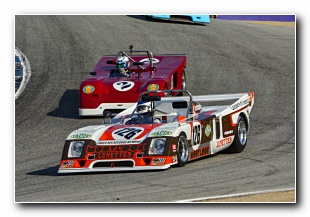 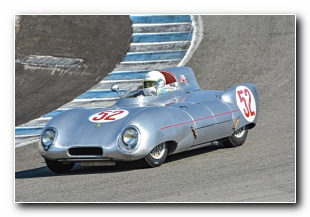 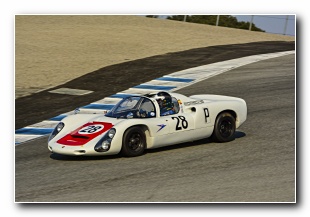 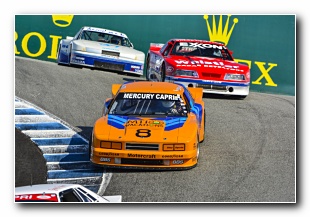 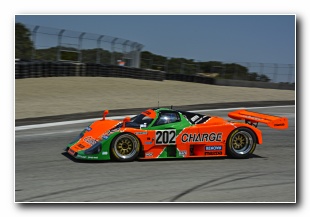